By far the single most common application for Thermal Imaging worldwide is electrical.

By definition there isn’t an electrical system in existence that is fail proof.

It can take the identification of one large electrical problem to pay for an extensive Thermal Imaging system. 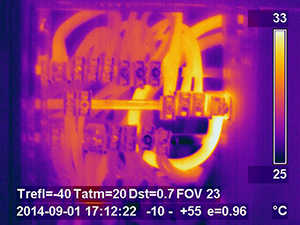 It is advisable to have any systems or circuits to be operating at, at least thirty per cent of the maximum load of the system or circuit. The higher the flow of power through the system the easier it will be to carry out any Thermal Imaging investigative work. Thermal Imaging is perfect for electrical inspections because it enables inspection of systems while they are in use. It is completely non contact so the danger of electrocution is greatly reduced. It is however paramount that the person operating the camera is a fully trained up Thermographer and or electrician, often times if they specialise in electrical inspections they will also be electricians.

If they are not it is essential that they have a qualified electrician with them throughout the survey both for health and safety considerations and also to advise of circuit loads, capacities etc. Due to the fact that with electrical inspections very high voltages can be involved, electrical cabinets in modern facilities can often be found to have spy glass lenses in the doors that have been specifically designed to enable both Thermographers and other maintenance professionals to see the workings without opening the cabinets. It is advisable to any one carrying out a Thermal Imaging inspection not to touch any part of the electrical system without exception.